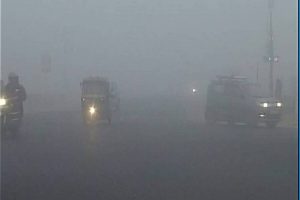 Kuldeep Srivastava, the head of the IMD’s regional forecasting centre, said “very dense” fog lowered visibility to “zero” metres at Safdarjung and Palam at 6 am.

The cold wave is likely to continue on Friday as well. Thereafter, the minimum temperature will start rising under the influence of an “intense” Western Disturbance (WD) which will affect northwest India from January 2 to January 6, said Srivastava.
The minimum temperature is predicted to rise to eight degrees Celsius by January 4-5.

Light rain is also expected in the national capital under the influence of the WD from January 3 to January 5.

Dense fog reduced visibility to “zero” metres, affecting traffic movement, in the national capital on the first day of the new year on Friday. The capital continues to shiver under intense cold with the minimum temperature dipping to 1.1 degrees Celsius, the lowest in 14 years.

Fitness Tips – How much exercise you need to be healthy