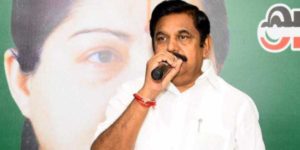 It also gave authority to both Palaniswami and Deputy Chief Minister and party coordinator O Pannerselvam to formulate electoral strategies, including alliances and seat distribution.

Apart from Palaniswami, Pannerselvam and the cabinet ministers, close to 4,000 functionaries participated in the mega event at Vanagaram, situated in the suburbs of Chennai.

The meeting, which was scheduled to begin around 8.30 am, commenced a couple of hours later due to heavy traffic. All roads leading to the venue were filled with AIADMK banners and flagpoles despite the Madras High Court’s repeated warnings not to erect such notices as they pose a threat to road users.

During the meeting, 16 resolutions were adopted by the council, most of which focused on helping the AIADMK retain power in Tamil Nadu. The council approved constitution of a 11-member steering committee to guide the party; appealed to the Centre not to discard the provincial council system in Sri Lanka; condemned DMK leader M K Stalin for criticising Palaniswami and said they would work hard to defeat dynasty politics and uphold democracy.