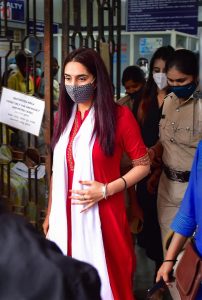 A bench of justices R F Nariman, Navin Sinha and K M Joseph set aside the November 3 order of the Karnataka high court refusing to grant bail to Dwivedi and others in the case registered under various provisions of the Narcotic Drugs and Psychotropic Substances (NDPS) Act.

Ragini was arrested by the Central Crime Branch (CCB), Bengaluru, on September 4, last year, for her alleged association with an international drug peddling racket.

She has been booked under provisions of the NDPS Act and Indian Penal Code (IPC) Acts.

The actress had accused the prosecution of framing her in the false case for public attention.

She is currently in judicial custody at Parappana Agrahara Central Prison.

On 1st day as US Prez, Biden to sign series of executive orders

China to sanction 28 US individuals, including Mike Pompeo for seriously violating Beijing’s sovereignty