President of India Ram Nath Kovind was addressing members of both Houses of Parliament, a customary speech delivered ahead of the commencement of the Budget session.

Condemning the violence on Republic Day in the national capital by a group of agitating farmers, President Ram Nath Kovind on Friday said the incidents on January 26 were very “unfortunate”.

Trying to allay the fear of farmers over the three new farm laws, the President said the new reforms are beneficial for the farmers.
Opposition leaders of 18 parties have decided to boycott his address in solidarity with farmers protesting at Delhi’s borders against the three farm laws. 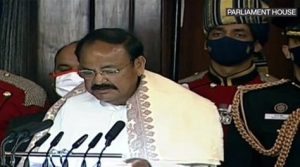 Aatmanirbhar Bharat isn’t just confined to manufacturing in India but also a campaign aimed at elevating standard of living of every Indian and boosting self-confidence of country. Our goal of Aatmanirbhar Bharat will be further strengthened by self-reliance in agriculture: Vice President M. Venkaiah Naidu 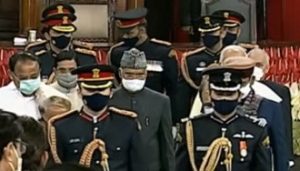 Veteran actor Arvind Joshi passes away at 84 in Mumbai

Not received any letter from TS govt regarding land allocation for new airports: Ministry of Civil Aviation