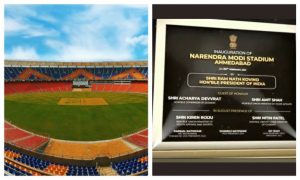 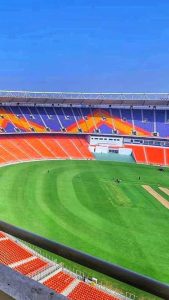 The stadium is spread over 63 acres, the stadium has been built at an estimated cost of Rs 800 crore and with a seating capacity for 1,32,000 spectators.

Motera cricket stadium in Gujarat’s Ahmedabad was earlier known as Sardar Patel Stadium, now it has been renamed as Narendra Modi stadium.

The stadium was inaugurated by President Ram Nath Kovind ahead of the India vs England 3rd Test on February 24, 2021, Wednesday.

The stadium in Ahmedabad has a capacity of 1,10,000, making it the largest in the world. However, for this Test match only 55,000 spectators will be allowed in because of Covid-19 protocols.

Exactly a year back, the venue was host to the joint town-hall show by PM Modi and US President Donald Trump.

Union Minister for Youth Affairs and Sports Kiren Rijiju said the newly-built Motera Stadium is not just the largest, but also one of the best stadiums in the world. A day before the Test match, Rijiju along with BCCI secretary Jay Shah visited the stadium to take note of the world-class facilities.

Schools for classes 10, 12 and colleges for final year graduation and post-graduation reopened in Gujarat