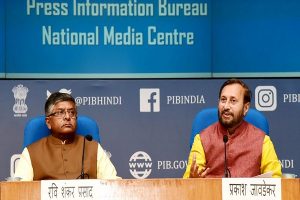 Central government has released new guidelines for regulating social media and OTT platforms to stop the misuse of content.

Briefing the media, Union ministers Ravi Shankar Prasad and Prakash Javadekar welcomed social media platforms to do business in India and praised them for garnering popularity and good number of users. They also hailed the platforms for empowered ordinary Indians.

Ministry of Electronics and Information Technology (MeITY) minister Ravi Shankar Prasad said that “We have not framed any new law. We have framed these rules under the existing IT ACT,” We are trusting the platforms to follow these regulations,” he said. “The focus of this guideline is on self-regulation.”

Track originator of message
The rules also call for tracking of the ‘first originator’ of a message and apply to a significant social media intermediary. It also wants the significant social media intermediary to have physical contact address in India published on its website or mobile app or both.
The government says while it is not interested in the content of the message, they wish to know who started the ‘mischief’. It wants social media platforms to disclose the first originator of the mischievous tweet or message as the case maybe.
This will be required in matters related to security and sovereignty of India, public order, or with regard to rape or any other sexually explicit material.
The rules also say that “users who wish to verify their accounts voluntarily shall be provided an appropriate mechanism to verify their accounts and provided with demonstrable and visible mark of verification.”

OTT content platforms
The government has called for a grievance redressal system for OTT platforms and digital portals as well. The government is also asking OTT platforms to self regulate and wants a mechanism for addressing any grievances.
While films have a censor board, OTT platforms will require to self-classify their movies and content based on age. The content will have to be classified based on age appropriateness. The government wants the OTT players to classify films based on 13+, 16+ and those for adults and clarified it is not bringing any kind of censorship to these platforms.
There has to be a mechanism of parental lock and ensuring compliance with the same. Platforms like Netflix already have an option for parental lock.

Three-level grievance redressal mechanism:
* A three-level grievance redressal mechanism has been established under the rules with two levels of self-regulation.
* Level I comprises the publisher and level II comprises the self regulatory body, while the third level is the oversight mechanism under the ministry of information and broadcasting.
* The OTT platforms will need to employ a chief compliance officer, nodal contact person and a resident grievance officer under the new social media regulatory mechanism.
* The self regulatory body would be headed by a retired judge of the Supreme Court or of a high court, or by a person of eminence from the relevant field, and can issue advisories to the publisher.