PM Modi, on his second day of Bangladesh visit, offered prayers at the Jeshoreshwari Kali Temple, one of the 51 Shakti Peeths, scattered across India and in neighbouring countries. 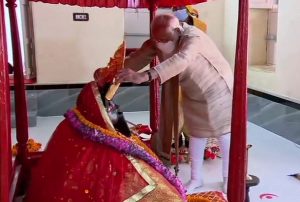 “Today, I got the opportunity to visit this Shakti Peeth to pay obeisance to Maa Kali. I prayed to her to free the human race from Covid-19,” Prime Minister Modi told after offering prayers at the Kali Temple.

PM Modi also coronated Maa Kali with a hand-made Mukut in the temple.

Taking to Twitter, Arindam Bagchi, spokesperson of the ministry of external affairs, said,” PM Modi places hand-made Mukut on Maa Kali. Mukut made of silver with gold plating. Hand made over three weeks by a traditional artisan,” the tweet read.

Prime Minister Modi said: “When I had visited Bangladesh in 2015, then I had got the opportunity to pay obeisance to Maa Dhakeshwari.”

“We have lived on the mantra of ‘Sarve Bhavantu Sukhinah’ Sarve Santu Niramaya’ and have always followed the concept of ‘Vasudhaiva Kutumbakam’. We always pray for the well-being of the entire human race on this planet,” he added.

The Prime Minister said that a community hall is needed at the temple, which could serve multiple purposes, especially in times of natural disasters.

“Today, when I came to this holy place, I got to know that when the Maa Kali Mela is held, many devotees come from across the border (India) to pray. A community hall is needed which could be multi-purpose so that when people come here during Kaali puja, it is useful for them too,” he said.

“It could be useful even for social, religious, and educational events. Most importantly, it could serve as a shelter at the time of disasters like cyclones. The government of India will take up the construction work. I express gratitude to the Bangladesh government that they have wished us well for this program,” added the Prime Minister.

The second wave of COVID-19 may impact market in short term, but remain optimistic about economic and earnings growth which could continue supporting the market….

IT raids at different locations of Dainik Bhaskar group