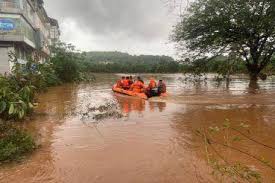 The India Meteorological Department (IMD) Monday has predicted that rainfall activity is likely to increase over Western Himalayan region and adjoining plains of northwest India from today.

The death toll due to the floods in Maharashtra state has nownreached to 251.

Deputy Chief Minister Ajit Pawar has visited different villages in Sangli district and used a rescue boat to reach out to flood victims in some areas. Pawar also interacted with the flood-affected people and assured them of rehabilitation and all help from the state government.

About seven flood rescue teams of Indian Navy’s Western Naval Command, deployed in Ratnagiri and Raigad, continued with efforts to provide assistance to the flood-affected population in the state.

Thanks to PM Modi, BJP leaderahip for the opportunity, Yediyurappa resigns as Karnataka CM